by an investor from Dartmouth College

Searching for a small business to buy and run instead of taking a more traditional post-MBA job like consulting is an idea that we’re seeing catch on at top business schools. At the Harvard Business School, for example, the number of MBAs who decide to look for a business to acquire right after graduation has gone from less than a handful a decade ago to more than a dozen, and in an occasional year, twice that amount. Stanford’s most recent study of search funds also reports a record number of active search funds. Still, we often wonder why more students don’t follow the entrepreneurship-through-acquisition path.

One of the most common concerns that we hear as we advise our students at HBS is that searching for a business to buy — a full-time endeavor — is too “risky.” While everyone should surely weigh this choice based on their own individual circumstances and subjective preferences, we think that these concerns about “risk” are misplaced and that searching for a business is less risky than other career paths that are traditionally considered more stable.

We put quotes around “risk” because we don’t think our students are focused on financial measures of risk — like the volatility of lifetime earnings — when they tell us that searching for a business seems more “risky” than taking a more traditional job. We don’t think there is much data to assess the actual financial risk of searching in comparison to other more traditional careers because there isn’t much historical data on financial rewards for either career. And, interestingly, while our students talk to us a lot about the “risk,” they don’t talk to us about the money differential; indeed, when they look at the business plans of small company acquisitions and compare those to the compensation typically offered in traditional career plans, they tell us that the numbers are too close to decide on that basis. So, it isn’t the money that worries them.

We have talked to them extensively to understand the source of their angst. We think that instead of financial risk, they are concerned about the chance of not acquiring a small business during the search, along with uncertainty about the search process itself.

And surely there is more reason to be anxious at the start of a search. Just compare starting a more traditional consulting job to launching a search. In a consulting job, there is a great fit between training and tasks at the outset; when starting a search, the tasks are often vague, and MBAs aren’t taught how to identify acquisition prospects. In a consulting job, there is clarity about both roles and the path to success; in a search, it hard to see what works well and most searchers do a little bit of everything, work hard, and hope for the best. Plus, a consulting job aligns with external expectations: nobody has to explain anything to anybody when choosing a consulting career. It is a well-worn path. Searching is more like bushwhacking in the forest of opportunity.

No doubt our students are right: there is a lot more reason to feel angst at the outset when searching than at the start of a consulting career.

But we think that is a very short-sighted view. Searching lasts a year or two. Let’s assume for now that the search is successful (we’ll deal with the other case later on). That means the searcher becomes a CEO of a business. Over time the business evolves to match the CEO, the management team is picked by the CEO, the products and customer base shifts to align with the CEO’s skills and interests, and the MBA-trained CEO is likely to understand the business better than competitors. Plus, the CEO’s significant ownership interest adds both to rewards and stability. The life of a small business CEO certainly isn’t worry-free, but the angst level surely is far less than searching.

In contrast, we think the level of stress increases during the course of a more traditional consulting role. Making partner is rare; in anecdotal conversations we’ve heard that fewer than one in ten MBA hires make it to the senior level of most large consulting firms. After all, it is the leverage of the pyramid structure that creates the wealth in consulting firms and that requires huge turnover at the bottom. Plus, the more senior the consultant becomes, the more the required tasks depart from MBA training; senior consultants need to be rainmakers, finding new, profitable clients for their firms, and they do that for decades, in the face of stiff competition from other firms.

In the long run, we think that being a senior consultant involves much more angst than being the CEO of a small business.

We don’t know exactly how this plays out, but the picture below sketches the general idea. Angst is higher when starting to search but then falls as the searcher settles into the CEO/owner role. In contrast, it is low when starting a consulting career but then goes up. Importantly, the larger share of a career takes place on the right side of the graph, when this kind of stress and uncertainty is low for a CEO of a small business but high for a consultant. 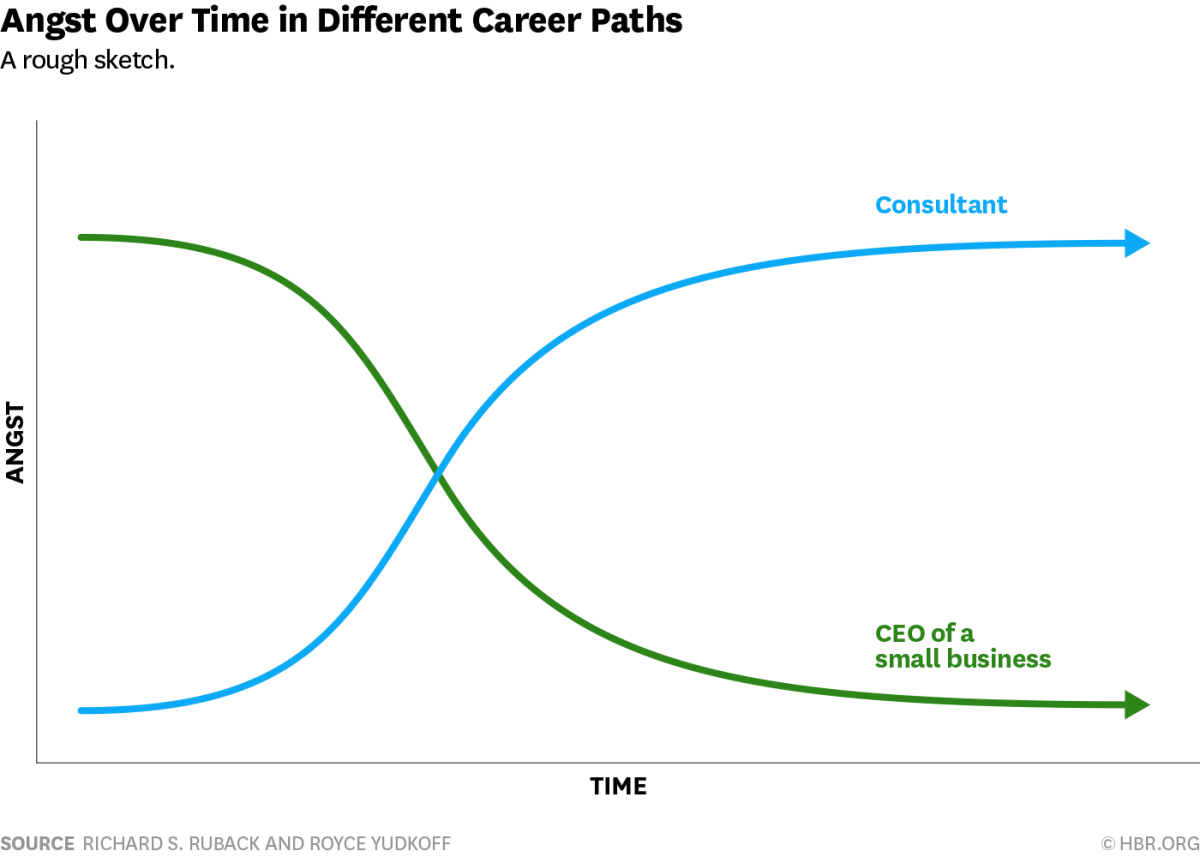 Finally, the picture is, of course, based on the assumption that the search is successful. We know it isn’t always, with estimates of about 26% according to the latest Stanford study of searches ending without an acquisition. What happens to those unsuccessful searchers? We’ve tracked our former students who decided to search with particular attention to those don’t end up acquiring a small firm. Most abandoned their searches because they found other attractive opportunities that interested them such as a start-up, private equity, or a leadership position in a business. More generally, we think searchers who are unsuccessful at finding a company to buy simply get a job after their failed search and that the experience probably makes them better managers who are more successful throughout their careers. Most of our students seem to change jobs in the first few years after getting their MBAs anyway, so the job hunt after a failed search isn’t a lot different from choosing a traditional career path in the first place.

So, here is the tradeoff as we see it: Searching for a small business to acquire gives you the opportunity for professional independence, something few ever achieve in a traditional job. Sure, there is stress and uncertainty early on as you search and then as you learn to run your business, and those years are probably tougher than if you pursued a traditional career. But over time, that angst reverses and owning your own small business can be better than a traditional career — at least on the angst dimension — for much of your professional life.

This article was originally published on HBR.org. More of my work can be found here.

searcher from University of Maryland at College Park

Would Love to See More Searchers Interested in Skilled Trades